Wood K plus Talente regional project "Wood be better!" at the Lange Nacht der Forschung at the UFT in Tulln 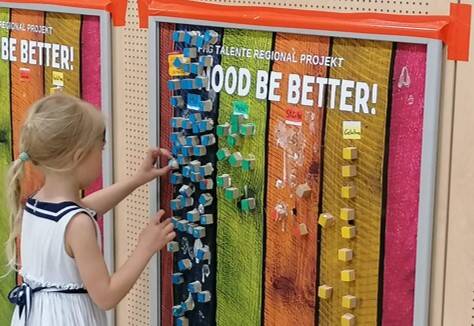 Wood K plus Talente regional project "Wood be better!" at the Lange Nacht der Forschung at the UFT in Tulln

In the contex of the project “Wood be better!“ children were able to do research-based learning at the LndF hands-on station and were experiment together with wood researchers on how to produce, mix and optimise bio-based adhesives themselves. The strength of the produced adhesives based on flour, starch or gelatine was then tested using wooden cubes. It was particularly exciting for the young participants to try out different mixtures and to improve them by adding acid or lye.

The station was well attended and children of all ages and different cultural backgrounds had a lot of fun making their special "secret recipe".  The experimental booklet produced as part of the project, which is also available online, was very well received as it summarises not only the various glue experiments but also other exciting experiments for school or home in several languages. On the whole, it was a very successful evening which had been enjoyed not only by young and old visitors but also by the exhibitors!